What is a Living Building?

On the outside, a certified Living Building might not look any different from a conventional modern structure that has an average impact on the environment. It is the performance of the various parts of the building that earns it the world’s toughest green-building certification, established by the International Living Future Institute (ILFI) and called the Living Building Challenge (LBC). An LBC building not only has to use regenerative sources of energy but produce more of it on the site than the volume consumed. The same “Net Positive” effect is required for the capture and treatment of water and waste recycling. This self-sufficiency has to also complement the health and beauty of the spaces inside and outside the building by connecting occupants to light, air, food, nature, and community.

Who would want to spend all this effort and resources designing and building LBC projects with tough standards? According to ILFI, quite a few organizations and individuals. Hundreds of certified and registered LBC projects around the world represent millions of square feet of commercial, institutional, educational and residential construction.

Series of talks at Vanderbilt University

Most of the Living Building Challenge concepts were introduced in the Part 1 and Part 2 of the three-part series of talks Making Nashville Living Building Ready at Vanderbilt University in March and June 2018.

I had a privilege of attending both parts and also the presentation of Jason F. McLennan, the creator of ILFI and LBC, who visited Vanderbilt on August 27, 2018 and gave an inspirational talk about The Power of Transformative Goals. After this great introduction to the thought-provoking design ideas, I felt the drive to contribute to this movement and joined the Nashville Living Future Collaborative group loosely associated with ILFI.

I am happy to share a short summary of the final Part 3 of the series Making Nashville Living Building Ready that took place at Vanderbilt University on January 31, 2019. The full 1:22 hr recording of it is posted on the Vanderbilt University youtube channel. The focus of the Part 3 was on the selection of the LBC-compliant construction materials using the example of the South’s largest 37,000-square-foot Kendeda Living Building currently being built at Georgia Institute of Technology in the heart of Atlanta, Georgia, USA. The chosen materials are extremely important for the LBC certification because just one wrong choice could delay the recovery of the building’s carbon footprint by dozens of years (if not hundreds).

Why Is the Structural Core of the Kendeda Building Made of Wood?

In our age of trying to go paperless and striving to save trees from cutting, it was counter intuitive to hear that largely untreated and unfinished wood has been the most sustainable and renewable material among all choices for the construction of the massive structural core of the Kendeda Building.

“The new wood that we use for the Kendeda Building has to be from sustainably grown trees certified by the Forest Stewardship Council, “ explained Joshua Gassman, sustainable design director at LORD AECK SARGENT architecture firm, design team project manager for the Kendeda Building, and presenter of the talk Making Nashville Living Building Ready – Part 3 at Vanderbilt University in Nashville, Tennessee on January 31, 2019. “This certification is not required for the reclaimed wood that otherwise would go to waste such as the trees that Georgia Tech cuts on campus for regular maintenance and the discarded wood from demolished buildings.”

Even though the State of Georgia is one of the major producers of timber in the United States, the state does not currently have any Forest Stewardship Council (FSC) certified producers of wood products. As a result, the Kendeda team could not use the local sources and had to find new wood from suppliers outside the state to be compliant with the strict LBC Materials Petal.

The local connection was a lot more fruitful for the salvaged lumber that was largely supplied through the Lifecycle Building Center of Greater Atlanta and the film production companies that no longer needed their used film sets. During the pre-construction phase, several engineers of the general contractor Skanska USA were able to uniquely design wooden floor decks that consist of over 470 prefabricated panels 6 ft. by 10.5 ft. each. Skanska team calculated that structurally only half of the two-by-six beams made from the new FSC certified wood is necessary to hold up the weight of the entire floor system. They suggested to fill the space between these structural beams with the salvaged two-by-four boards from film sets.

This innovative design helped both save on the costs of the materials and add an attractive pattern to the ceilings in the building without compromising the structural integrity or stringent fire code requirements. Another dimension of sustainability was added through a socially responsible initiative. Skanska management team hired and trained local community members to fabricate these wood panels directly on site.

Because the manufacturers of construction materials are generally not prompted to disclose the ingredients in their products, the ILFI established their own Declare Label as a transparency platform and product database. The registered manufacturers disclose where each product comes from, what it is made of, and how it can be recycled at the end of its life. The third-party verification and certifications are often solicited from the manufacturers to confirm their claims. This rigorous process ensures the reliability of the Declare Product Database and makes the product search faster and simpler for the LBC participants, according to Gassman. 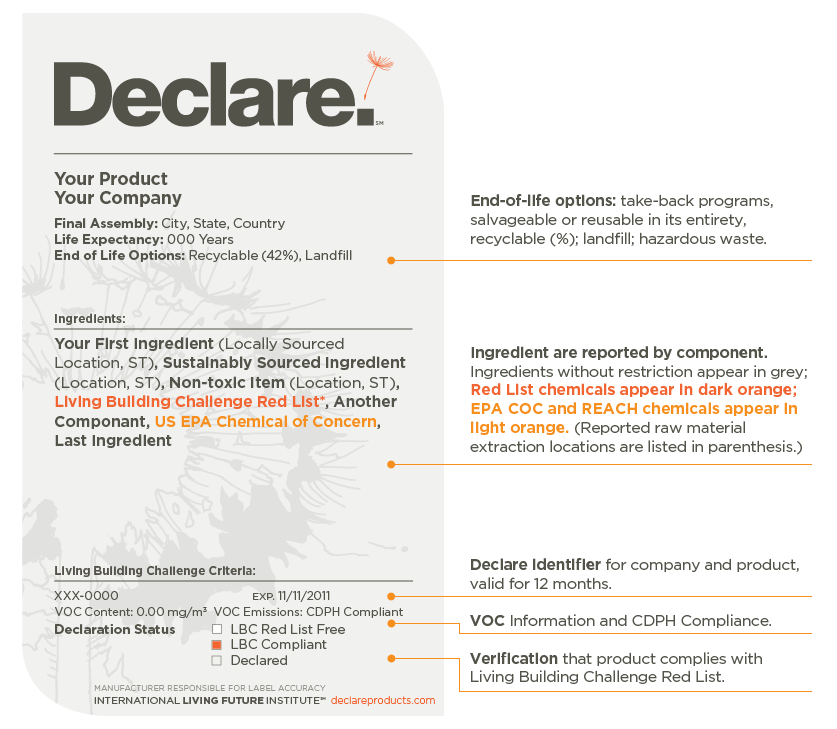 The Declare Label also allows to incorporate the information about the polluting chemicals on the ILFI’s Red List that might bio-accumulate up the food chain and/or harm construction and factory workers. Nearly 800 of these compounds are currently categorized into 20 classes based on the EPA and other environmental protection lists.

Embodiment of Carbon in Metal and Concrete

“It has been known for a long time that embodiment of energy and carbon is inherent in such labor and equipment intensive materials as concrete and metals, especially in comparison with wood that has minimal carbon embodiment,” continued Gassman. “Even if a building made from concrete would not produce extra pollution, it will take decades and often centuries to neutralize all the carbon footprint trapped in these materials during their manufacturing. We are trying to minimize these kinds of materials as much as possible in the Kendeda Building.”

The Kendeda Building team was able to eliminate the use of most of the metal posts and beams in the core structure but had to keep the ¾ inch steel rods for suspension of the heavy floor panels since alternatives are not strong enough at this time.

Similar story is with the use of concrete. It was necessary for the building’s footings and foundation. However, this mixture was injected with CarbonCure additive. The special concrete that is used for the radiant floors is even more unique. In addition to the CarbonCure, this mix has 7.5 pounds per cubic yard of synthetic fibers designed to protect the tubing nestled in the radiant floor and reduce the amount of the concrete to the minimum by pouring it on top of a layer of foam. 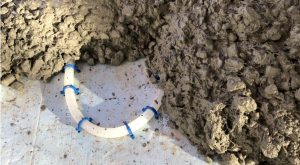 From an energy standpoint, the radiant floor heating and cooling is much more efficient than the traditional air-blowing HVAC system, Gassman noted. Under the radiant floor setup, water (sometimes with some refrigerant) slowly and gradually subtracts energy from the floor when it is cooling, and adds energy when it is heating. The concrete mass acts as a heat sink for the room: soaking up heat from the space above, or releasing it radiantly. To avoid any humidity condensation on the floor and walls, the outdoor air in the ventilation system is treated to remove the moisture before the air enters the rooms.

This slow and steady radiant heating and cooling in combination with ventilation is perfect for the majority of the rooms in the Kendeda Building. For the first-floor auditorium that has a variable capacity up to 170 people, a different system was designed pulling the air through ceiling into the cooling chamber with air passing through highly efficient spin diffusers in a displacement system (different from conventional forced air setup) and diffusing it at the floor level.

A lot more information about the overall design, energy, water treatment, materials, and other LBC topics are covered in the video recordings of all presentations in the three-part series Making Nashville Living Building Ready. These recordings are posted on the Vanderbilt University youtube channel at these links: Part 1, Part 2, and Part 3.

We look forward to seeing you at both events! 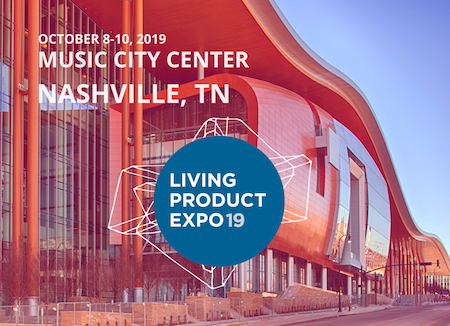 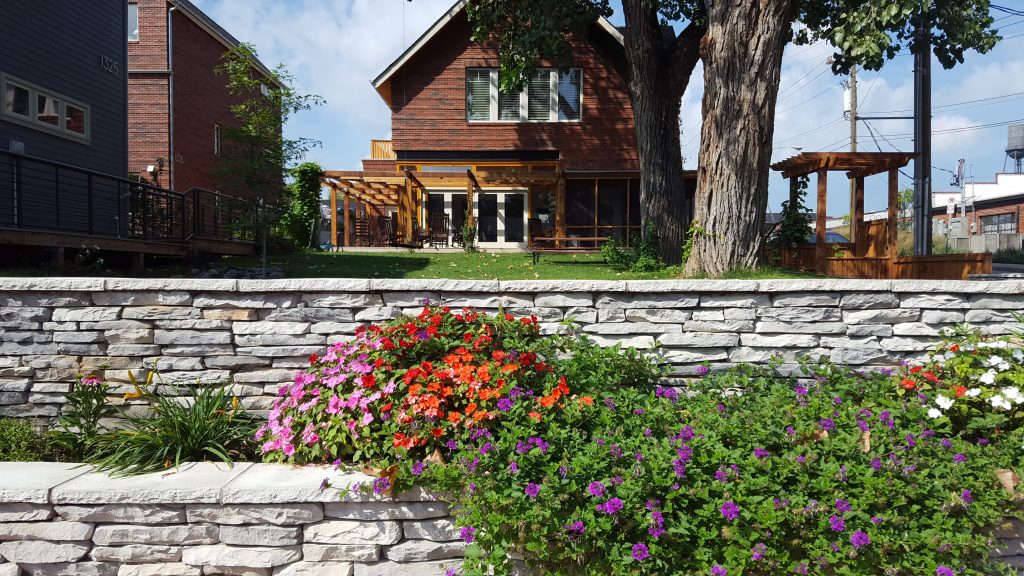 Introduction Are you familiar with intentional communities, cohousing communities, and other types of community living arrangements? Over 1,500 of them are listed on the website… 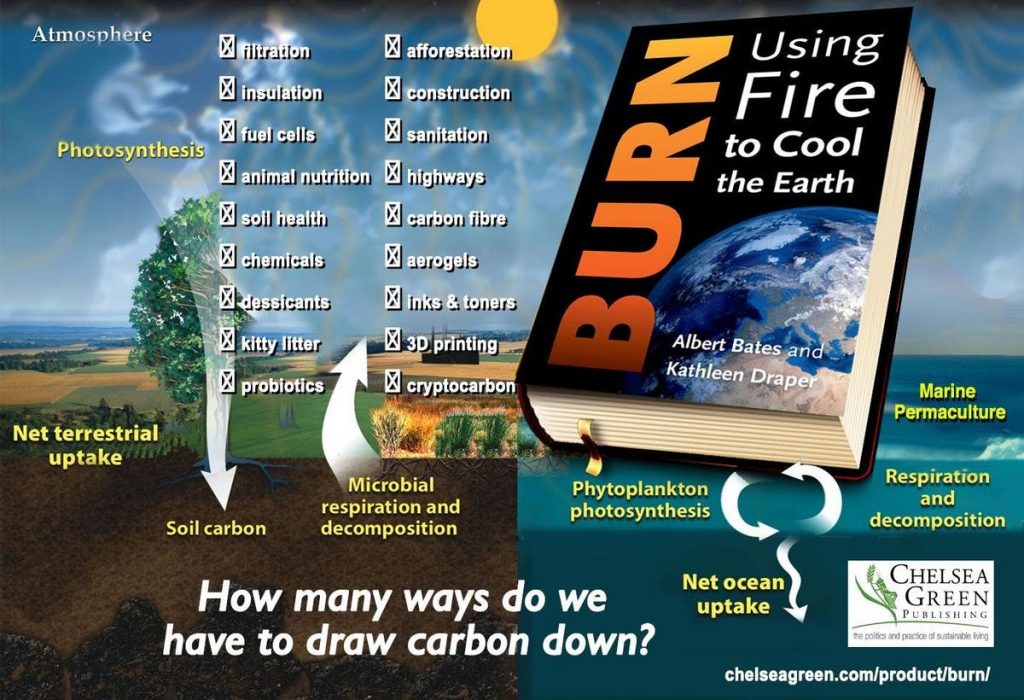 Nashville, TN – January 14, 2019 – Your Green Homestead has been officially launched with the post Natalia’s Vision as the first Contest entry in the…